There are two types of airports: towered and non-towered. These types can be further subdivided to:

Towered Airport
A towered airport has an operating control tower, and the air traffic control (ATC) is responsible for providing the safe, orderly, and expeditious flow of air traffic at airports where the type of operations and/or volume of traffic requires such a service.

Sources for Airport Data
When a remote pilot operates in the vicinity of an airport, it is important to review the current data for that airport such as communication frequencies, the airport services available, closed runways, whether an airport is under construction, or other important pertinent information. Four common sources of information are:

The Chart Supplement U.S. (formerly Airport/Facility Directory) provides the most comprehensive information on a given airport as it contains information on airports, heliports, and seaplane bases that are open to the public. The Chart Supplement U.S. is published in seven books, which are organized by regions and revised every 56 days, are available online at the FAA website www.faa.gov/air_traffic/flight_info/aeronav, but also more readily available at SkyVector.com.

The FAA publication that provides the aviation community with basic flight information and Air Traffic Control procedures for use in the National Airspace System of the United States is the Aeronautical Information Manual (AIM). 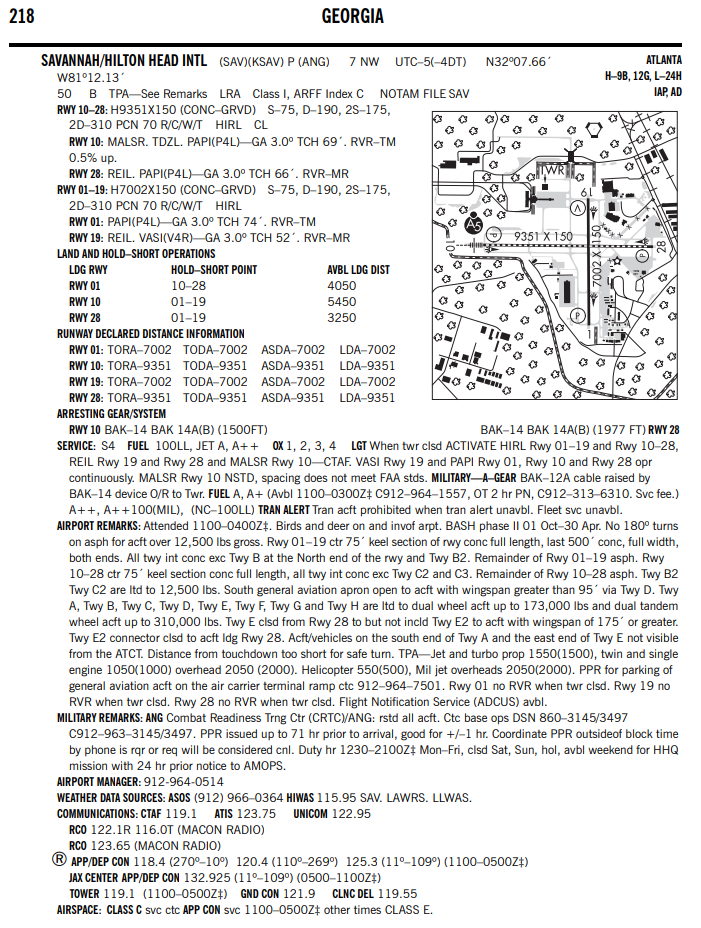 Under Airport Remarks, you can read that there is some bird and deer activity, along with some runway construction as well. If you were operating near this airport, this information would be helpful in determining which direction aircraft may be more-likely to be landing from. Specifically regarding the exam, there may also be some questions asking you to identify which UNICOM or CTAF frequencies are being used at a particular airport.

Automated Terminal Information Service (ATIS)
The Automated Terminal Information Service (ATIS) is a recording of the local weather conditions and other pertinent non-control information broadcast on a local frequency in a looped format. It is normally updated once per hour but is updated more often when changing local conditions warrant. Important information is broadcast on ATIS including weather, runways in use, specific ATC procedures, and any airport construction activity that could affect taxi planning.

When the ATIS is recorded, it is given a code. This code is changed with every ATIS update such as, ATIS Alpha is replaced by ATIS Bravo. The next hour, ATIS Charlie is recorded, followed by ATIS Delta and progresses down the alphabet.

You can find the ATIS frequency using an online sectional chart or by using a Chart Supplement U.S., and the frequencies can also be found at https://www.faa.gov/air_traffic/weather/asos/.

Non-towered Airport
A non-towered airport does not have an operating control tower. Two-way radio communications are not required, although it is a good operating practice for pilots to monitor other aircraft on the specified frequency for the benefit of other traffic in the area.Pilots commonly use special VHF radio frequencies by locating the Common Traffic Advisory Frequency (CTAF) for a particular airport. The CTAF may be a Universal Integrated Community frequency (UNICOM), MULTICOM, or Flight Service Station (FSS) frequency, and is identified in appropriate aeronautical publications and also on SkyVector.com.

UNICOM stations may provide pilots, upon request, with weather information, wind direction, the recommended runway, or other necessary information. If the UNICOM frequency is designated as the CTAF, it will be identified in appropriate aeronautical publications with a “C” inside a blue dot.

An FSS (Flight Service Station) is physically located on an airport and may provide airport advisory service (AAS) at an airport that does not have a control tower, or where a tower is operated on a part-time basis and the tower is not in operation. The CTAFs for FSSs which provide this service are published in appropriate aeronautical publications.

MULTICOM is a mobile service not open to public correspondence use, used for essential communications in the conduct of activities performed by or directed from private aircraft. 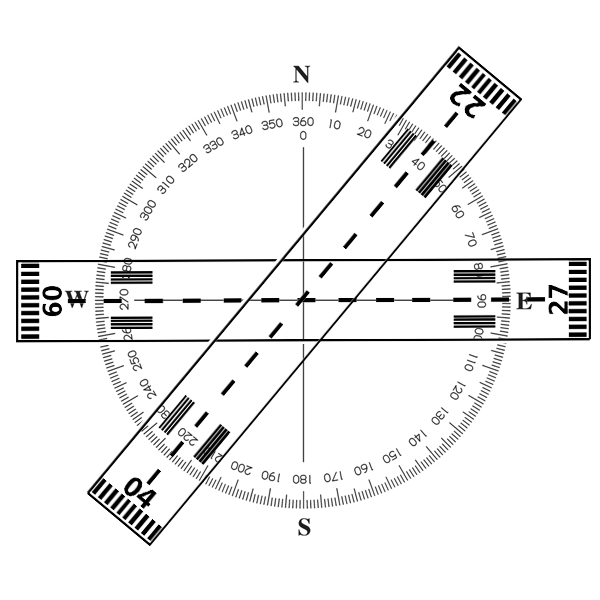 For example, runway zero-four (04) runs southwest to northeast and corresponds to 40º on the compass.

Runway zero-niner (09) runs west to east and corresponds to 90° on the compass.

Runway two-two (22) runs northeast to southwest and corresponds to 220° on the compass.

Runway two-seven (27) runs east to west and corresponds to 270° on the compass. 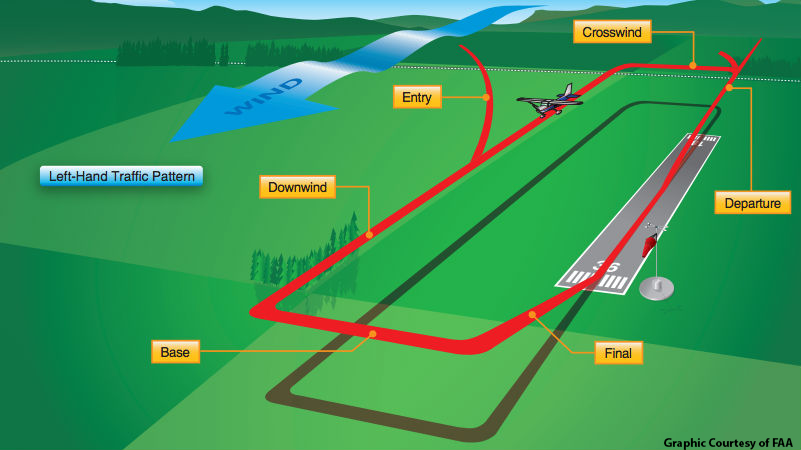 When operating at a non-towered airport, all turns should be made to the left unless otherwise specified in the sectional aeronautical chart. If the pilot makes an announcement on approach to landing at runway three-six (36), the pilot might announce: "...midfield left downwind to runway three six." This would mean the aircraft is west of the runway on a 180° parallel course to the landing, flying south to approach and land in a northern direction.

Pilots could also announce their location on approach to land when they are in the base leg or final approach leg. The final approach leg can also be referred to as the "short final." There could be any combination of similar questions on your Knowledge Exam.

Below is another example depicting a landing onto runway zero-four. You might hear the pilot state: "...midfield left downwind to runway zero-four“ which means the pilot is west of the runway heading south, to make a left turn and land from the south. Again, manned aircraft should enter a landing traffic pattern at a proper altitude, entering 45° at the midpoint of the downwind leg. It is not recommended to enter a traffic pattern at the same time you’re descending and should be avoided. 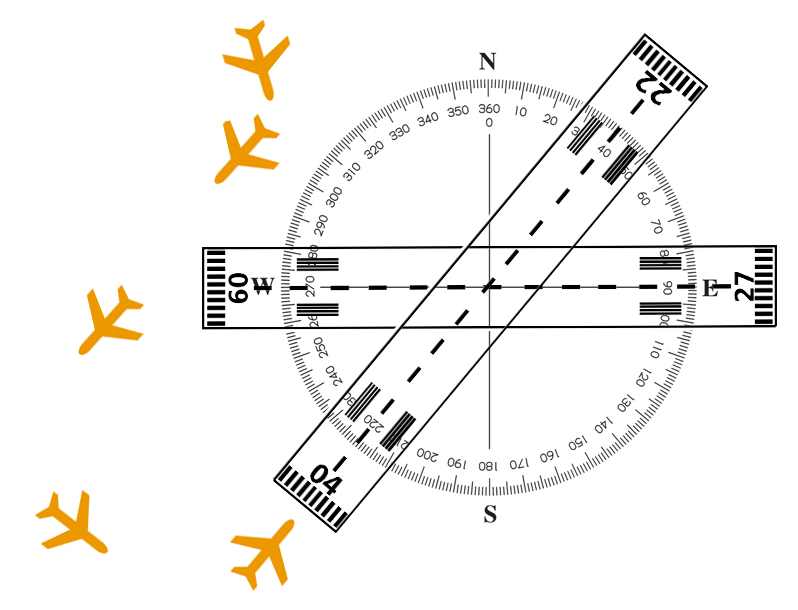 The FAA wants all pilots to know that most mid-air collisions occur within the vicinity of an airport on clear days, and not cloudy days. This clearly indicates how critical it is that pilots pay strict attention to all surroundings, and to follow proper procedures at all times. So it’s best to familiarize yourself with traffic patterns in regards to the directional compass, as there will likely be some questions pertaining to landings and approaches on the part 107 exam.

Report Wildlife Strikes or Accidents
The FAA has long recognized the threat to aviation safety posed by wildlife strikes and has initiated several programs to address this important safety issue, including the collection, analysis, and dissemination of wildlife strike data. A remote pilot should report any strike to any type of bird, flying mammal, or a terrestrial mammals large than 1 kg (i.e.: rabbit, fox, domestic dogs or cats, but not rats mice, chipmunks or shrews). Accidents can be reported at https://wildlife.faa.gov/strikenew.aspx or by completing form 5200-7.

Secure Identification Display Areas (SIDA)
The FAA wants remote pilots to understand that certain areas at an airport require special security clearance and an SIDA badge.Your part 107 may have a simple question regarding the SIDA badge.

Right of Way Rules
As previously mentioned a few lessons back, 14 CFR states that a remote pilot cannot operate an sUAS in a manner that interferes with operations and traffic patterns at any airport, heliport, or seaplane base, including controlled and uncontrolled airspace. Remote pilots must remain clear of, and yield right-of-way to, all other aircraft. The FAA refers to this as See and Avoid. To comply with See and Avoid requirements, a remote PIC cannot use a first-person view camera or binoculars to assist, as only a remote pilot’s diligence or own natural unaided eyesight efforts may be used (glasses and contacts are acceptable).

So again, in all circumstances, the remote pilot in command must give way to helicopters, gliders, powered parachutes, parachutists, and manned or unmanned balloons as well and if you’re flying a fixed-wing unmanned aircraft, and are approaching another similarly-sized fixed-wing unmanned aircraft, both pilots should alter course always turning right to avoid a potential accident.

Remote pilots should properly scan for other aircraft in the sky by systematically focusing on different segments of the sky for short intervals; scanning from left to right in intervals of no more than 10°, with each area being observed for at least one second to be sure you can enable detection. In larger-scaled flight operations, it’s very common to have 1 to 3 visual observers assisting the remote PIC.

Fantastic! We're almost done! You've now completed Lesson 6 on Airport Operations, and it only gets easier from here forward! As always, we review actual questions and provide the answers at the end of each video tutorial so if you need a quick refresher, please review some of those questions before taking the quiz-questions below.